THE AUTHORITY GALLERY
Are we ready for yet another take on superhero morality? Let's hope so, because "The Authority" retools old ideas for a new century. Warren Ellis has his heroes think globally as they kick butt locally, stopping or slowing down to consider how they can use their powers to "make the world a better place." How he can pull this off in our oh-so-ironic age is an artistic mystery, but the results are clear: superheroes with believable personalities and community spirit. Two story arcs, each encompassing terror and evil on a global scale, pit the group of seven against armies of superhumans dispatched in scenes reminiscent of the best action movies. Many of the characters from the older Stormwatch series reappear here, and fans will be pleased to learn that Ellis has, if anything, improved his depth and storytelling prowess. Bryan Hitch's penciling, Paul Neary's inking, and Laura Depuy's coloring are all equally responsible for the gloriously lovely artwork--from interdimensional spaceships to dismembered spinal cords, they make saving the world beautiful. 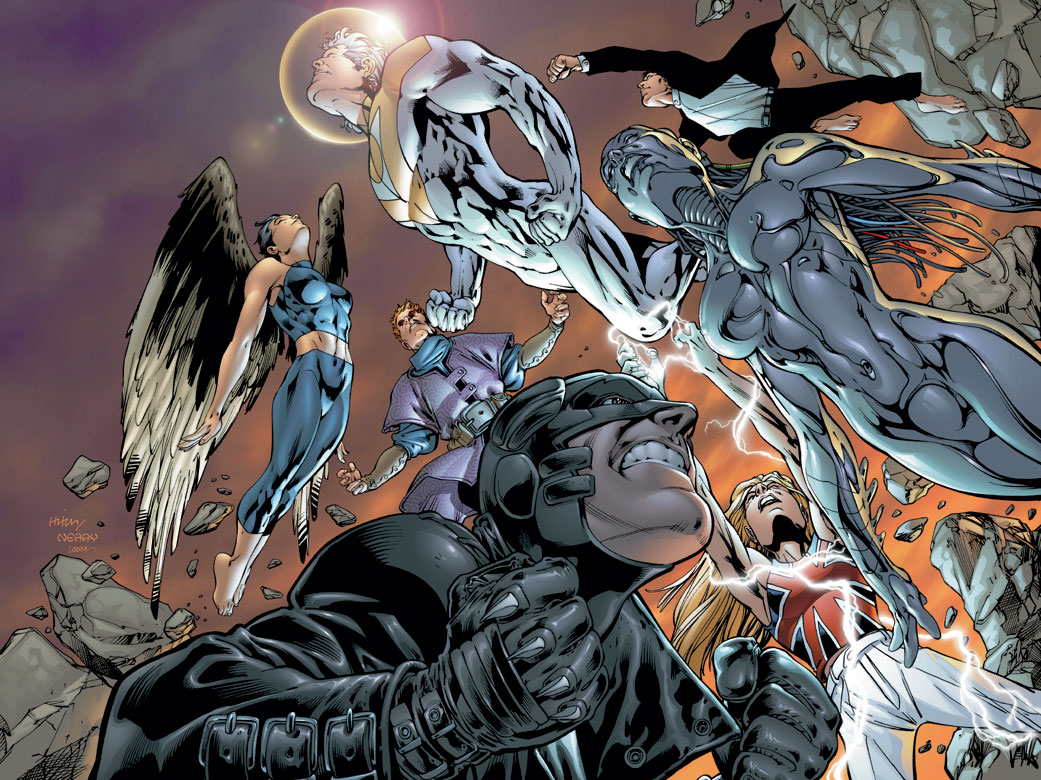 »Authority: KEV TPB (One-shot plus More Kev 1-5; w Garth Ennis; a Glen Fabry).
»Authority: KEV One-shot
»Authority: More KEV # 1-5; w Garth Ennis; a Glen Fabry.
Kev Hawkins is a Special Air Services corporal turned assassin, called in by the British government when they want someone removed. The Authority are Earth's last line of defense, known and feared across many galaxies and dimensions. Fan favorite writer Garth Ennis (Preacher, War Stories) and acclaimed artist Glenn Fabry (Global Frequency) take us on a ride that includes the possible destruction of all life on Earth as well as guns, aliens, explosions, a tiger and an orange. Hawkins' new assignment is to find and eliminate The Authority and, oddly enough, his task is easier doen than said. An awkward partnership is forged as they set out to save the planet from certain, alien doom. Can they succeed before The Midnighter uses Kev's head as a hood ornament for the Carrier? Later, Apollo and Midnighter are paired with their favorite homophobic SAS operative. Together they must help appease an alien armada bent on destruction and genocide that stands poised to assault the planet Earth.
»Authority: Magnificent KEV #1-5
The Boss has another lethal mission for Kev involving his least-favorite allies  the Authority  and it will lead Kev down the darkest path of his life!
»Authority: Scorched Earth (One-shot; w Robbie Morrison; a Frazer Irving).
The birth of a new being has caused the Sun to rapidly age, causing a potential supernova five billion years early! While the easy solution would be to kill the newborn entity, the consequences of such an action could spell doom for the entire solar system! Will the return of a long-forgotten ally turn the tide of battle? Will our heroes prevail against incredible odds? Or is mankind doomed to extinction?

The Authority began as Stormwatch, a comic book published by Wildstorm Studios under the banner of Image Comics. It was a lackluster title that sold mostly because of the wider high volume of comics sales and its assocation with the then-novel Image Comics. That is, until Warren Ellis took over the title. Ellis, then nearly unknown, introduced new characters, escalated the violence, offered more characterization, and introduced a political element. But the declining comics industry as a whole, as well as the negative association that the earlier Stormwatch issues had brought to the title, conspired to bring down the title. Ellis concluded with a spectacular three-issue storyline, "Change or Die," that offered the view of one of Ellis's original characters -- that of Jenny Sparks, spirit of the tumultous 20th Century -- that super-heroes perpetuated the status quo, beating insane villains in tights and restoring the order that benefited the powers-that-be, while never using their powers to challenge those powers and their injustices.
Stormwatch was relaunched in a second series that hoped a new #1 issue would increase sales. The new series was a bit more political and introduced new characters -- as well as the artistic team of Bryan Hitch and Paul Neary. But its sales also lagged. Ellis took the opportunity that his writing of WildC.A.T.s / Aliens provided and killed off most of Stormwatch in an inter-company crossover that focused, on the Wildstorm side, on a team other than Stormwatch! After a final issue that followed this crossover, Stormwatch was dead.
But Ellis couldn't get a few of its characters, including Jenny Sparks, out of his mind. Together with Hitch and Neary, he put together The Authority, a successor to Stormwatch that would feature four-issue storylines filled with widescreen violence, the foes increasing storyline by storyline. The new series was a hit. Ellis, unable to trump the foe of his third storyline -- in which the Authority fought Ellis's version of God -- planned to leave the book, accompanied by the artistic team, with issue #12.
Ellis's chosen successor, the then-almost-unknown writer Mark Millar and the then-almost-unknown illustrator Frank Quitely, planned a second year that would begin where all other super-team books left off, putting into practice Jenny Sparks' desire to make a better world and not simply reinforce the status quo and the powers-that-be. Thus Millar's run began with the Authority overthrowing a government known for killing dissidents and starving its own people. The Authority even verbally put President Clinton in his place. In response, government officials and the 2000 Presidential candidates condemned the team, which had become overnight celebrities. As the Doctor said while pouring a libation on Jenny Sparks's grave, the Authority had taken that brave step towards making a better world "and they love us for it." But the repercussions of this step would be seen in Millar's final storyline, "New World Order," which saw the G7 economies strike back at the Authority that had seemingly overthrown their hedgemony.
Then Frank Quitely quit, Arthur Adams was selected as his replacement, and a four-issue fill-in storyline was scheduled to give Adams time to complete his other projects and get up to speed on The Authority. Then came the 11 September attacks on the U.S. and the oversensitive attitude they created, combined with editorial concern over the content of Millar's Authority. Then came the long-delayed second chapter of Millar's final storyline and the controversy surrounding its censorship. Adams left the project after two issues, and another artist was brought in to do the last issue of Millar's run -- and the last of the title.
A couple months later, with The Authority in limbo, a new Stormwatch series was launched, this one subtitled Team Achilles. Featuring military characters without super-powers, dealing with a world of super-powered people who presented problems not only to the governments of the world but to justice, this new book retained in its conception much of the innovation and the implications of The Authority, while examining those issues from an alltogether different perspective. During this time, The Authority reappeared in two one-shots, as well as in the Stormwatch: Team Achilles title.


The following eras are available:

First published online on 21 January 2001. The Authority, Stormwatch, and related characters and art are copyrighted by their DC Comics. This site is copyrighted by Julian Darius and intended for scholarly purposes and to increase interest in its topic. This site was mirrorred here just in case this great information was lost.