Stan Winston's "Realm of the Claw" comics:
Culled from the explosive mind that brought us silver screen favorites as: The Terminator, Predator, Aliens and the primordial chaos of Jurassic Park, Stan Winston now unleashes his own creative fury in the form of CAT GODS!

Gods who prowl the Realm of the Claw. The Realm was once a tranquil place where even Man shared in the bounties of its rich soil and crystalline waters with all its other living creatures. But it was only a matter of time before Man revealed his true nature. Nakuru and Sabyr would eventually lead the Beasts to victory over Man…but man's lust for power, like his stench, would not soon wash away or be forgotten… 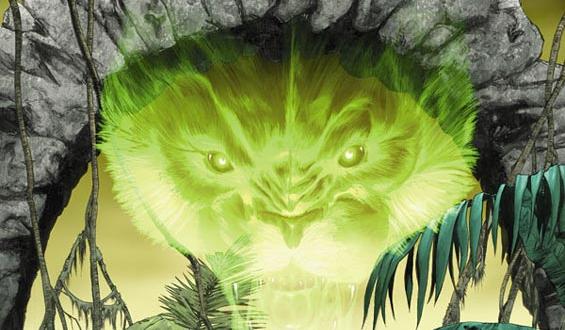 The comicworld was first introduced to us via the fantastic backupstory in the back of Stan Winston's first comicseries called "TRAKK" and the back of the comic had also an enigmatic ROTC-cover to boot the story inside.
The backupstories were reprinted in the ROTC "Convention Special" to really show off the story written by Takenaga and Winston and drawn by Gabriel Rearte and Liam Sharp. This special comic retailed in 7-2003 also via the direct market (at 5.95 usd) to also introduce the next step...

The next step being a 6 issue Image-miniseries drawn by David Yardin. Unfortunately after merely two issues the series cot cancelled BUT Stan WInston made the promise to make a new effort and bringing the story to the fans via a GraphicNovel approach and he announced those plans in 6-2004....

Fast forward and the sollicitation in the June 2006 Diamond Previews says the following:

When zookeeper Harrison Reed becomes plagued with strange, dream-like visions, he is forced to confront the unthinkable: that he and his brother are more than they seem. With enemies lurking in every corner and the allure of power corrupting at every turn, the truth must be discovered else his world…and his sanity…will be lost forever.

Leaping from the imagination of Hollywood powerhouse STAN WINSTON, REALM OF THE CLAW is a story with bite…

It's a rumble in the jungle that redefines the old saying: Survival of the fittest. Welcome to the Realm of the Claw!

Paradise isn't just a fairy tale. It's very real… A place nestled just beyond the mystical Archway that borders the worlds of Man and Beast. In the Realm, all life is sacred, even that which must be sacrificed so that another many live. Under the wise, just rule of the cat god, Nakuru, order reigned and peace soon followed.

But Paradise was doomed to be lost once Nakuru left to rejoin the gods at Oldurai Mountain and left the Realm to his sons, Tare and Tswana. In the ensuing battles to come, one thing became certain. With enemies yet unseen and the allure of power defiling the very heart of the Realm, the clashes of Beast would eventually spill from the lush jungles of Paradise to the concrete and steel jungles of Man.