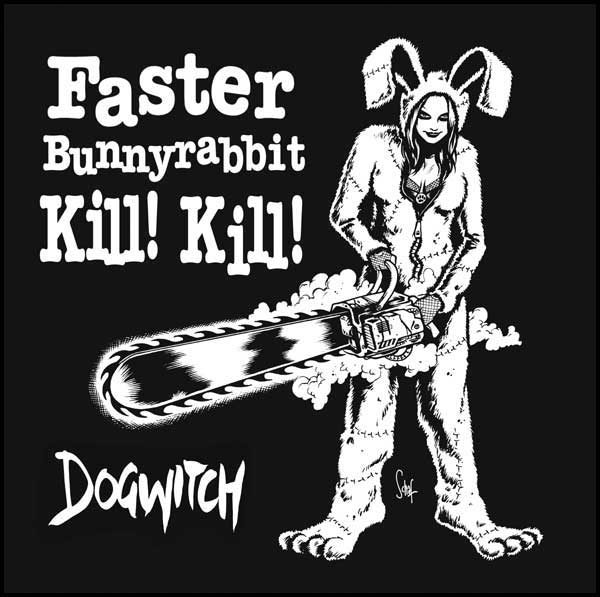 Dogwitch is a comic book series by British artist Daniel Schaffer following the shocking exploits of exiled witch-superstar and home movie maker, "Shrieking" Violet Grimm.
"Banished deep into the evil Banewoods for daring to practice her own unique brand of Molotov Magick, outcast Dogwitch Violet Grimm continues to stretch the boundaries of accepted 21st Century witchcraft.  As tales of bad sex and dangerous voodoo spread her infamy through the Banewoods, Violet captures the attention of a multitude of weirdos and resigns herself to what she believes is her predestined B-movie lifestyle. Churning out provocative home videos for a berserk and hungry fan base in her pursuit of arcane knowledge, she feeds her diary with the dating rituals of the sick and heinous. Violet is the Garbo of witches, a reclusive legend in a depraved, gory, funny and fiendishly sexy world."  MATURE READERS.

DOGWITCH VOLUME 3: MOOD SWINGS TP
by Daniel Schaffer
Collects Dogwitch #13-18!
Take a peek at the twisted origin of Violet Grimm, courtesy of Moko the Goblin Clown and his Toxic Pool of Illumination. Still reeling from Dolores' betrayal, Violet now faces more trouble in the form of a bizarre allergy to the psychic fallout. Rising from Moko's toxic waters only to discover that her Goblin birth party has been gate crashed by the Sex Doll Cheerleaders, the bruised and battered Dogwitch once again comes face to face with Elastic Head. And with Mr. Kinky playing sidekick, Violet Grimm is heading back to the Nice Bunny World to unravel a cosmic conspiracy and face off with those responsible for banishing her to the Banewoods.
MATURE THEMES SC, 144pgs, B&W SRP: $15.95

“Violet’s sexy, sure. She’s a kinky goth icon with a fondness for leather and rubberwear, okay. She’s hot, whatever. But she’d never stand still long enough for a book of pinups,” says Schaffer. “So, with SPECIAL FEATURES, you get not just pin-ups, but also outtakes, deleted scenes, character and creator commentary, sketches, and plenty of previously unreleased material. This is a sketchbook, a pin-up book, a story book, and also a behind-the-scenes look at both the creation of the DOGWITCH comic and Violet’s own home videos.”