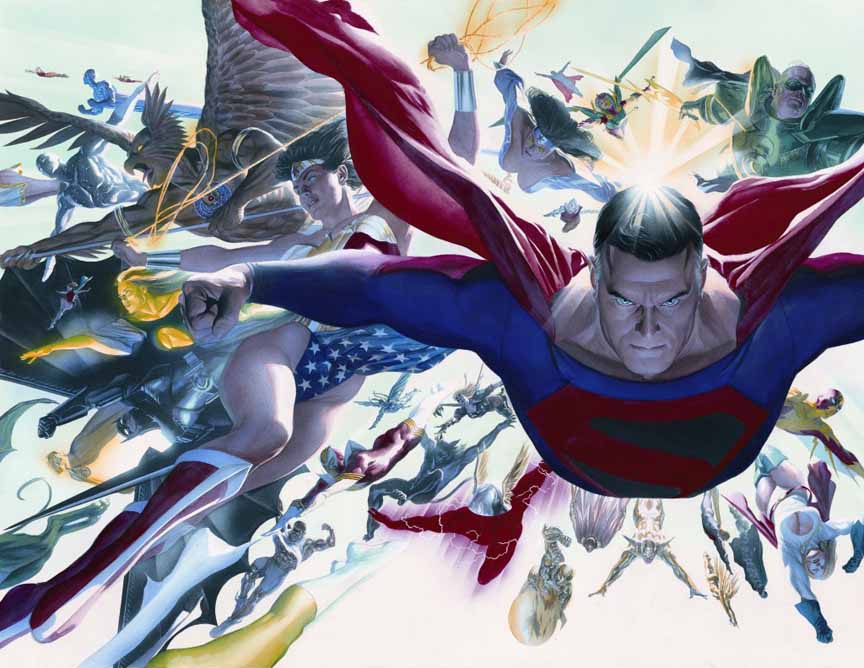 Reviews from Amazon.com This is your usual epic story of global proportions including the JLA except it is much more than that. This story revolves around the key chracters of the JLA (Superman, Batman, Wonder Woman) and how they have coped with the changing times...apparently not too well. Superman has exiled himself from the people of Earth and is holed up in the Fortress of Solitude literally in solitude, Wonder Woman has lost her royalty since she has failed in her duties as an ambassador. And Batman apparently had never recovered from the attack by Bane in Knightfall, he weares a metal exoskelton in order to move around, the Wayne Manor is destroyed. But despite all that, Batman has managed to build a fleet of bat-robots in order to keep Gotham City protected, apparently with much success. Also, all the old timers are gone and is replaced by Magog and his Gen X superhero cronies who have no regard for civilians or moral decency. This is only the first couple of pages. Enter Parasite and Captain Atom and Magog is Kansas, poof, Kansas is gone with millions dead. This brings Superman out of retirement and the rest of the former JLA follow suit and joins Superman in the good fight. Eveything seems perfect but his return after so long has taken a toll on the relationship b/w the metahumans and the humans. The UN is less than thrilled at seeing this resurfacing of superheroes whom they have come to see with a suspicious eye and also most of the gen. X heroes refuse to see the light and follow the examples of the league. Even Batman sees the return of the JLA as a curse. So, going on his merry ways Superman and the JLA imprison the new superheros who refuse to follow suit, Captain Marvel under brain control from Luthor release all the prisoners on the JLA and himself goes out to detroy Superman. And if all this wasn't enough, the UN afraid that the fighting b/w the metahumans will spread and destroy Earth (like Kansas) decides to deploy three nukes onto the battaling metahumans. With a loud boom and flash and a mushroom cloud the battle is over and nearly half the metahumans (good and bad) are dead. Although this is the severe oversimplification of the entire plot, this is the basic premise. More happens at the end but writing that down here will serve as a spoiler and shortchange the readers of an enjoyable reading experience. As I have said before the plot is epic and involves nearly every conceivable character to ever appear under the DC Universe banner (from Superman to Orion to Mr. Miracle to even a cameo by Dead Man). The battle is epic and decides the fate of the entire planet. This is just me describing the plot, now the art....visually stunning. The art by Alx Ross is truly a feast for the eyes, his interpretations of the character is very vivid and realistic as if they could and do exist. From his drawing as an aging Superman (who seems to be getting a little pudgy around the waist) to his aging Batman (complete w/ a comb-over), Alex Ross manages to bring age to the familiar superheroes in a very realistic manner...no matter how powerful, no one can escape the weight of time. After saying all that, I would say that the art is flawless and Mark Waid does an excellent job of tying together the entire JLA for one final time for their greatest adventure. Kingdom Come is judged by many (including myself) to be one of the best comic books ever written. There's simply no words for the magnifigence conveyed in this book. The sublime text and awe-inspiring pictures meld perfectly. There are also touching human moments, through the human character of Norman McCay. The plot, which is wonderful in itself, goes like this: in an unspecified future, that atually looks pretty much like today, superheroes (or "metahumans") have run amok. The superheros of yesteryear has been replaced with innumerable others that are more cold, ruthless, irresponsible, and have less regard for human life. A preacher, Norman McCay, starts to visions about Armaggedon, which is apparently coming pretty soon. Norman is selected by The Specter, an agent of a higher power, to "judge". He is then taken to see the events that will lead up to the coming battle. He watches as Superman, long gone, comes out of retirement to start a new Justice League to combat the newer breed of mankind's "protecters". The characterizations in this book are extremely powerful. All the major superheroes return, including Batman, Wonder Woman, and of course Superman. We get to go inside of these characters and see who they really are and why they are doing things. It shows everybody in a surprisingly human light, where nobody is entirely good or evil. The art is nothing short of earth-shattering. The beautiful fully painted illustrations can convey human emotion as well as the incredible power of superheroes. The central issues of the comic book are very interesting. As Norman McCay walks down a street filled with superheroes fighting another battle, he wonders if humanity gave up it's drive and ambition by allowing superheroes to solve all our problems for us. The climax, the best combination of pictures and text I've ever seen, hits you like a punch in the gut. The conclusion is one of the most inspiring moments in comics. Unless you read this, you are missing something. 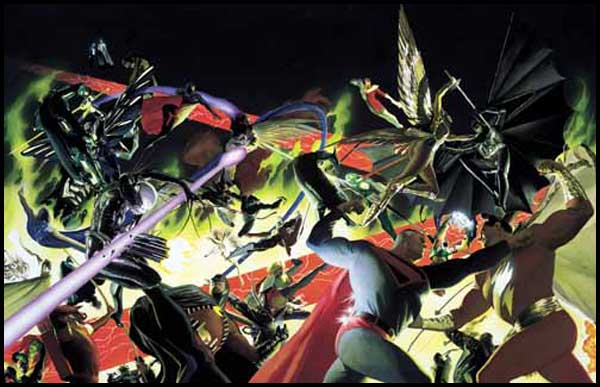 Jess Nevins has put together an amazing run of annotations (see the Alan Moore Annotations section of the site for more of his work). Three of his annotations focus on DC mini-series:

You can find the annotations at Enjolrasworld