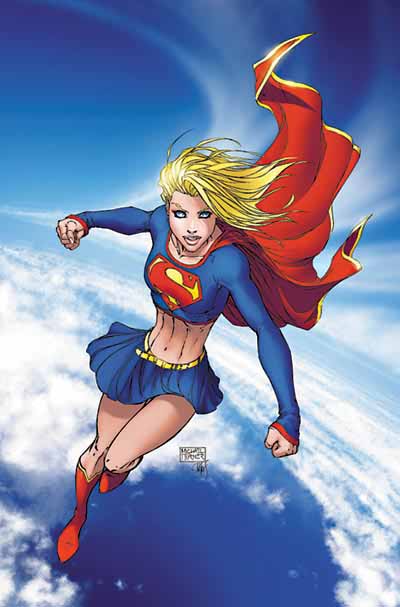 Throughout Superman's existence, several heroines have operated under the alias of Supergirl. A cosmic archetype, the typical elements of each are that she possesses powers and abilities similar to those of Superman. Also, many of the Supergirls share intimate links to The Man of Tomorrow - whether they are a cousin and fellow survivor of Krypton, or possibly his daughter. Another common trait of Supergirl is blonde hair and a costume with colors and designs similar to those of Superman.

The first recorded Supergirl was conjured up by Jimmy Olsen, during one of his most bizarre adventures. This Supergirl had brown hair, and an orange and green costume, with the S-shield resembling that of Superman's.

The second Supergirl was an actual being: Kara Zor-El. Arriving on Earth as a teenager, this Supergirl was groomed by Superman to become a major super-hero of Earth and the Universe. She took on the identity of Linda Lee Danvers, and operated throughout the United States of America - whether in the small town of Midvale or the big cities of San Francisco and Chicago. She was a valiant member of both The Legion of Super-Heroes and The Justice League of America. This Supergirl died at the hands of the reality-conquering Anti-Monitor. When reality was saved, her existence was stricken from all records. To date, only a few individuals throughout the known cosmos recall this Supergirl.

The third Supergirl was an entity named Matrix, which could assume the genetic construct of any known organism. Ultimately, this individual assumed the classic form and abilities of Supergirl and paved the way for a new legend of Supergirl to emerge.

This third Supergirl was succeeded by a fourth - an angel which claimed the body and identity of a recently deceased teenage girl. This newest Supergirl, using angelic powers and operating on a spiritual belief of righteousness, became a close confidant of Superman.

A fourth Supergirl - an update of the legendary Kara Zor-El, recently appeared in our reality, and assisted her fellow Supergirl, Superman, and Superboy through many adventures.

Now, a fifth Supergirl has come into being... one claiming to be the daughter of Superman. Brought into modern reality by mysterious beings called The Futuresmiths, this Supergirl... also called Cir-El, is a true enigma. Unlike the previous incarnations, this Supergirl has short, black hair, and wears a black costume with a completely different S insignia.

There is yet another interpretation of the Supergirl archetype... the heroine known as Power Girl. In a preceding reality, Power Girl was the twentysomething cousin of Superman. Proving herself as a brave, powerful hero, Power Girl became a member of the fabled Justice Society of America, and briefly served in two splinter groups of the JSA: The Super Squad, which included herself, a grown Robin, and the original Star-Spangled Kid; and Infinity Inc., which included several sons, daughters, and protege of the Justice Society members.

Surviving the Crisis on Infinite Earths, Power Girl's origins were apparently altered. But recent times have shown her original, actual origin may still be valid, and Power Girl has displayed powers similar to those of Superman, and likewise, a weakness from exposure to Kryptonite. Still a vibrant, twentysomething super-heroine, Power Girl has carved her own legend, and has served as a member of both, The Justice League of America and The Justice Society of America.

- An individual known as the Time Trapper once created a "pocket" universe where an alternate set of the planets Krypton and Earth existed. In that universe's timeline Clark Kent began his superhero career as a youth called Superboy. Unfortunately in that universe Superboy disappeared into the future and died saving the lives of the Legion of Super-Heroes. When a set of Kryptonian villains escaped they used their super powers to lay waste to the universe's Earth. Hoping to stop these villains, the heroic Lex Luthor of that universe created out of proto-matter and modeled from the genetic code of that Earth's Lana Lang an individual who was given a costume based on Superboy's. When she and Luthor were unable to stop the Kryptonian criminals, Supergirl was sent to Superman's universe to get his help. Superman, Luthor, and Supergirl tried to stop the criminals, but the criminals nearly killed Supergirl, and killed everyone on the Earth. Believing no other alternative existed Superman ended up killing the criminals to prevent them invading Superman's universe. After killing them, Superman took the injured Supergirl to heal and live with Ma and Pa Kent. At the Kent farm, she was known as Matrix. When Superman felt he needed to exile himself in space, Matrix interpreted that to mean she should use her body changing abilities to replace Superman in Metropolis. When Superman returned to Earth with the Eradicator, the Eradicator caused Matrix to believe she was Superman. Superman had to battle Matrix in her doppleganger form. Deciding she was a risk to Superman and the Kents, Matrix decided to explore space, but she later returned to Earth to help Superman defeat Brainiac when Brainiac brought Warworld to attack Earth. After Lex Luthor II appeared, Supergirl returned to Earth and became attracted to him and worked with him and Team Luthor until discovering Luthor planned to clone her. Supergirl worked with the superhero team the Titans. Later she bonded her protomatter body with the dying body of Linda Danvers.

Supergirl has had shapechanging powers, psychokinetic powers that let her fly, send out blasts, and protect herself with a force field, but her bonding with Linda Danvers has altered her powers. Supergirl is an earth-born angel. First Appearance: SUP #16 (April 1988)

Years ago, a UFO entered Earth's atmosphere. Containing a young woman, the craft was discovered by Superman. Soon, it was revealed that the young woman had powers and abilities similar to those of the Man of Steel. Calling herself Power Girl, and adopting the identity of Karen Starr, the new heroine debuted as one of the most powerful crimefighters to come along since...Superman. Was she from Krypton? That was easily assumed, and Power Girl believed herself to be Superman's actual cousin. However, evidence revealed she was not from Krypton, and instead was from the fabled realm of Ancient Atlantis. Despite this, her powers remained intact - super strength, flight, super speed, and even super vision. Besides Superman and Wonder Woman, few others had raw power the likes of Power Girl.

Tutored in the ways of being a hero - by nonother than Superman himself, Power Girl joined the Justice Society of America - where alongside the original Star-Spangled Kid, she was the first new member in decades. Eventually, Power Girl departed the more mature JSA and joined the Justice League , where she operated throughout America and Europe. She briefly assisted the JSA affiliate Infinity Inc. as well. While not achieving the fame of Wonder Woman, Supergirl, or even a Batgirl, Power Girl did make a qualified name and reputation for herself; among her fellow super heroes.

Recently, Power Girl has gone back to her roots. Wearing her original costume, and settling in New York City, Power Girl has also rejoined the JSA. And new evidence suggests her original origin may be valid. Is she a kissing cousin of Superman? Is she from another dimension? Only time will tell...but just as her return to the Justice Society has cemented her amongst the ranks of that prestigious gathering of heroes, so too does her connection and similarities with Superman, cement her into the chronicles of the Last Son of Krypton. For despite her fighting spirit, dogged determination for independence, and muscled beauty...Power Girl cannot escape from the shadow of Superman!