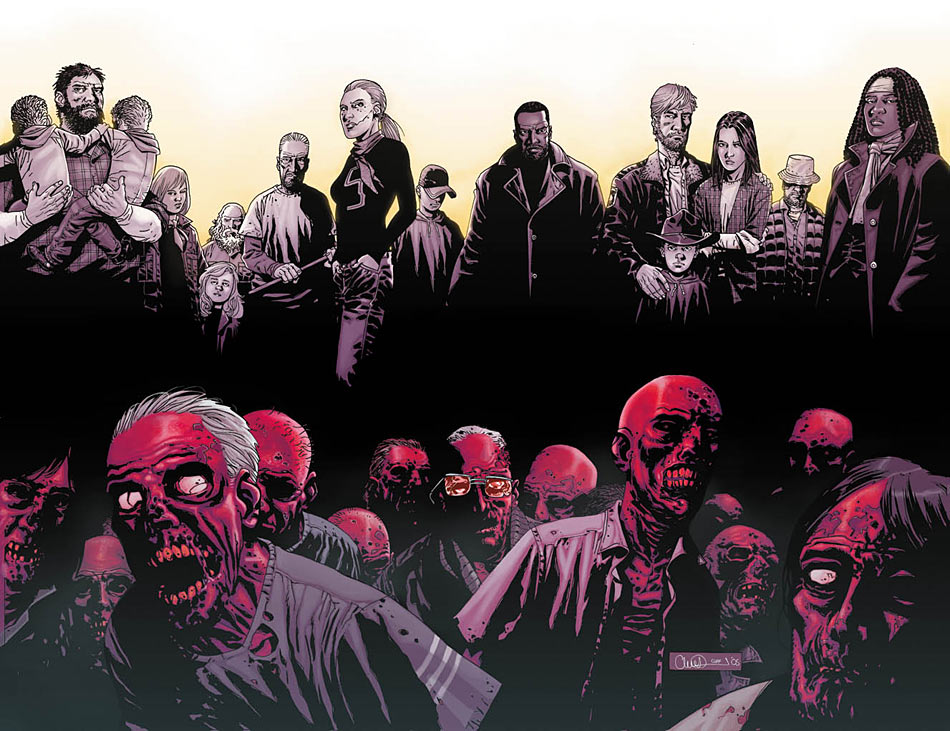 The Walking Dead TPB 1 "Days Gone Bye "(#1-6; bw; Robert Kirkman, Tony Moore)
Taking a well-worn genre—flesh-eating zombies overrun the world and the unlucky surviving humans must deal with the gruesome aftermath—and approaching it from a purely character-driven point of view propels this series into the spotlight from out of nowhere. This collection of the first six issues of the ongoing series opens with police officer Rick Grimes awakening from a gunshot-induced coma. From here, he's immediately dragged into a world where dangerous revenants are shambling amok without any sort of an explanation. From the moment Grimes comes to, it's a harrowing battle to avoid hordes of decomposing zombies and a hope-against-all-odds search for his missing family. Grimes makes his way to Atlanta, the nearest large city where there may be other living people, and events take several unexpected turns upon his arrival, as he meets up with a rural encampment of survivors. Of course, as in recent hit movies 28 Days Later... and Dawn of the Dead, the last humans may turn out to be as much a danger as the zombies. Forceful scripting that gives the book a strong grounding in reality, crisp b&w artwork, a shocking final sequence and brisk, gory proceedings elevate this book from the trash heap of pedestrian horror comics.
The Walking Dead TPB 2 "Miles Behind Us "(#7-12; bw; Robert Kirkman, Charlie Adlard)
The Walking Dead TPB 3 "Days Gone Bye "(#13-18; bw; Robert Kirkman, Charlie Adlard)
This volume follows our band of survivors as they set up a permanent camp inside a prison. Relationships change, characters die, and our team of survivors learn there's something far more deadly than zombies out there...each other.
The Walking Dead TPB 4 "The Heart's Desire "(#19-24; bw; Robert Kirkman, Charlie Adlard)
Life in the prison starts to get interesting for Rick Grimes and the rest of our survivors. Relationships heat up, fizzle out, and change entirely almost overnight. By the end of this volume, relationships between key characters are radically changed, setting the stage for future events in THE WALKING DEAD.
The Walking Dead TPB 5 "The Best Defense "(#25-30; bw; Robert Kirkman, Charlie Adlard)
As the survivors settle into their prison home something has drawn them out into the open... out of the prison... out of their sanctuary. This is a major turning point for the over-all story of THE WALKING DEAD and it sets the stage for years to come.
The Walking Dead TPB 6 "The Sorrowful Life" (#31-36; bw; Robert Kirkman, Charlie Adlard)
Trapped in a town surrounded by madmen Rick must find a way out or die trying. Meanwhile, back at the prison, the rest of the survivors come to grips with the fact Rick may be dead. A major turning point in the series is reached.