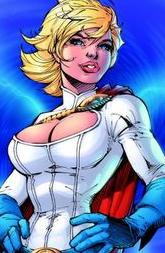 Who Is Power Girl?
An Indepth Look at One of the Central Characters in DCs Infinite Crisis

Written by Mark B.

Ever since the days of the 1985 Crisis on Infinite Earths, the true origin of Power Girl has been something of a mystery. To this day, she remains one of the few remaining dangling threads from that epic crossover event. But twenty years is a long time for most of us, and it is likely that all but the most avid students of comic history will have questions about Power Girl, and just why the events of Infinite Crisis are so important to her character. If youve ever said What the heck is going on with Power Girl and why is she important to Infinite Crisis? - heres your answer. One of the biggest revelations in the past twenty years happened last month in JSA: Classified #3. Psycho Pirate, the only person in the universe to remember the full events of Crisis of Infinite Earths, comes back and tells Power Girl that shes from a universe that existed before the current one, something she has no memory of. With that, the truth begins to unravel. 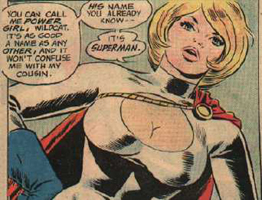 Power Girl was created by Wally Wood in 1976. She first appeared in All-Star Comics #58. While the character is notable today for being what many consider to be obscenely endowed, it should be noted that according to rumor and several anecdotes, Wood actually intended to draw her chest larger and larger in each issue. Joe Staton finally reined in her massive chest-size after All-Star Comics #65. The rumors stemmed from Woods own comments stating thats what he wanted to do and the fact that she was originally designed to be a very voluptuous character with a bob of blonde hair and an extremely form fitting costume. Despite the voluptuous form and costume, originally the character was a feminist and often resented the attitudes of older men. 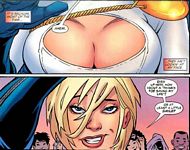 Originally, Power Girl was Kara Zor-L, the cousin of Superman of Earth-2. When Earth-2's Krypton was about to explode, Zor-L launched her as an infant to Earth in a ship at the same time as Superman's. However, her ship took a much longer route, which explains why she didn't reach Earth until the 1970s. The Ship that Zor-L created for Kara (called a Symbioship ) was very different than the ship created by Jor-L for Superman. The ship kept her in stasis until she reached Earth, but provided her with life experiences and education of a Kryptonian (Showcase #97-98). By the time she reached Earth, she was already in her mid-twenties (That was later retconned after Crisis of Infinite Earths where she was actually around eighteen).

Shortly after arriving on Earth, Kara found her cousin Kal-L who took her under his wing. Her early career was rocky due to the upbringing she had. Kal-L taught her how to fit into human society. It was never revealed where she was or what she did during that time. She took the guise of Karen Starr, a computer programmer soon after. In the late 1970s, she joined with Robin and Star Spangled Kid to form the All-Star Super Squad. Shortly thereafter, that group went on to become full members of the Justice Society of America (All-Star Comics #58-60). During her time with the JSA, she tried her best to distance herself from her cousin, whom she viewed as being "overbearing." To aid with this, Superman made a point to be less involved with the team and let Karen grow into the role of his replacement on the team.

After joining the JSA, she made it a point to establish a life outside super heroism. She met a reporter named Andrew Vinson who was determined to learn as much as he could about Power Girl. Her high profile appearances attracted the ship that brought her to Earth. The Symbioship bonded itself to Vinson. The Symbioship was supposed to have terminated it's programming upon arrival to Earth. It failed and Power Girl had to fight and defeat the ship to free Vinson (Showcase #97-98). Vinson then helped her establish a secret identity and find employment. Wonder Woman gave her a "memory teacher" to teach her how to program computers. Vinson obtained for her a "no questions asked" position at the Ultimate Computer Company (Showcase #99). Soon after that, Vinson and Karen became lovers.

As she matured, she became one of Earth-2's most powerful heroes. She aided Earth-1's JLA in numerous cases (Justice League of America #147-148, #171-172, #183-185, #207-209, and All-Star Squadron #14-15) and defeated Brain Wave after he captured the Flash and Green Lantern (Showcase #99). She was also a frequent ally of Huntress (also a member of the JSA and daughter of Batman in Earth-2), whom she befriended (Wonder Woman vol. 1 #274-276). In the early 1980s, Power Girl affiliated herself with Infinity Incorporated, assisting the group in defeating rogue JSA members who were made ruthless by "drowning" in Koehaha, the Steam of Ruthlessness (Infinity Inc. #3-10).

Crisis of Infinite OriginsPower Girl again joined the JSA to defeat the servants of the Anti-Monitor. As a result of this event, the histories of Earth-1 and Earth-2 were merged, and the histories of each of the characters was changed. Power Girl's history and relationships were erased from existence and a new origin was devised for her. This left her without a true identity for almost twenty years. 1987s Secret Origins #11 claimed that Power Girl was Kara, born around 45,000 years ago as the granddaughter of Arion, Lord of Atlantis. When Kara was threatened by bodily possession by her evil uncle, Garn Daanuth, Arion sent her through time to the late 20th century. She aged from infancy to her teens while traveling. Arion "tampered" with her genetics to give her Superman-like powers. However, medical tests run by Doctor Mid-Nite (JSA Classified #2) showed that her powers are natural, not magical like she was lead to believe.

The origin introduced in Secret Origins #11 still had some big holes. Kara still remembered bits and pieces of the Pre-Crisis era. She had a vague recollection of Earth-2 and her status as the cousin of "a middle-aged hero the world knew as Superman." Later in the 1987 and 1990 version of Who's Who, it suggested in continuity that Kara thought that she was the cousin of Superman until the events in Crisis. Gerard Jones made references to this in Justice League Europe.

Roger Stern eventually pointed out that Superman and the world didn't learn of that Krypton's existence until after the Crisis (Man of Steel #6, Superman[second series] #1). It was later reaffirmed in 1995's Man of Steel Annual #4. This fact would initially make Superman disbelieve her. In Action Comics #650, she told the JLA that she first met Superman on the way to a JLA/JSA get together. In those days I was a sort of second generation member of the Justice Society, and I didn't impress easily ... but that day had my head spinning." Kara then went on to describe the post-crisis JLA and JSA first encounters with the New Gods (It was based on the 1980s Justice League of America #183-185). She said "No one, not even Orion, fought harder than Superman. That battle took place before he learned of his Kryptonian parentage. I sometimes wonder if he suspected his origins might trace back to New Genesis."

In the late 1980s, Power Girl joined the Justice League as the JSA had been disbanded. During her tenure she was nearly killed by a mystical being. She would have died if Superman himself hadn't come and assisted in her medical treatment. He used his heat vision to enable surgery to be performed on her nearly invulnerable tissue. She survived due to this, but for a time lost all of her vision powers and couldn't fly. The JSA reformed in the late 1990s and Power Girl rejoined the team as a key member. Shortly after, her Arion origin was called into question. This all leads up to JSA: Classified and Supergirl #1. 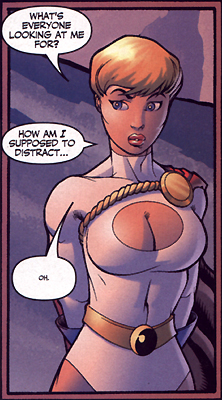 In Supergirl #1, she fought the newly discovered Kara Zor-El. Physical contact and close proximity between the two caused Power Girl to lose control over her powers. It was suggested that this effect happens when two copies of the same being try to occupy the same point in space. Power Girl then lost confidence, having finally lost all hope that she was in fact the only cousin to Superman, if she was even his cousin at all.

She revealed in JSA:Classified #2, she discussed the humiliation of discovering she wasnt Supermans cousin with Big Blue himself. She left the revealing hole in her costume because she never knew who she really was and never had a symbol to put there. So, you see its not just to show off!

In the current JSA: Classified arc, both of these origins are disproved. At the end of issue two, it's revealed that Psycho Pirate (the only person to remember the universe before post-crisis) is trying to drive Karen insane. Issue number three concludes with Psycho Pirate strapping Power Girl into her Symbioship and hinting that she's who she always was, Power Girl from Earth-2. Somehow she survived the Crisis. How? And is she the only one? Is the new Supergirl also Karen Starr? Does this mean Power Girl is also Karen Starr? Or is she something else? In JSA: Classified #4 (out this week), Geoff Johns has vowed to drop a revelation that will completely redefine the character and serve as a prelude Infinite Crisis.

go here to find out the truth